August 2022 COVID update: COVID-19 (and the policies that attempt to control/stop it) has hit all businesses hard. As I write this in Michigan, staffing jobs, maybe especially seasonal jobs, is incredibly difficult. So PLEASE BE PATIENT with the people who actually are showing up for work and trying to serve you. And almost everything here could be wrong. Where I know of updates, I have added a note like this below. But as of August, 2022, things are very slowly getting less weird.

I love vacationing in the Michigan's Upper Peninsula, and I often have friends looking for suggestions. So after putting this together for e-mail a few times, figured I should just put it on my website.

This is unabashedly aimed at people traveling from the Detroit, MI area, though may be useful for people from anywhere.

This is also aimed at people traveling by surface vehicle. Flying is how to GET somewhere, driving is about the journey. I have very little experience boating, though I could imagine spending a lot of time and money traveling around (literally!) the UP by boat. Would be fun (and terrifying -- Lake Superior is about as close to an ocean as you get without salt).

When leaving Detroit a good stopping point if you don't get all the way to St. Ignace: West Branch: We've stayed three times at the Quality Inn at West Branch, which is right off I-75 exit 212. First time was an accident -- got a late start, weather was horrible, decided to quit for the night and resume the trip in the morning. Last few times (including lunches without a stop) were deliberately planned because we enjoyed the place so much. Decent rooms, and the Lumber Jack restaurant with the motel is fantastic for breakfast, lunch and dinner. About three hours from Detroit. Next door to Tanger Outlet Center, we will not be held responsible for blowing the vacation budget before crossing the bridge. 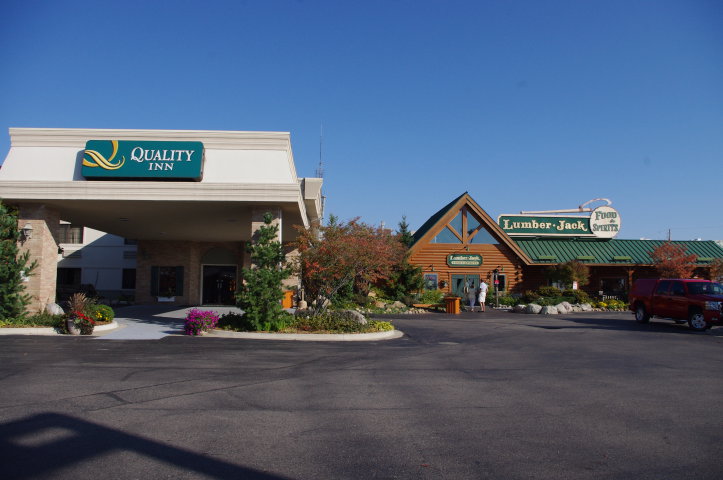 Mackinaw City: We've never actually stayed in Mackinaw City, though we often pause there on the way. There's a nice park under (literally!) the bridge, you can stick a foot in Lake Huron..or Lake Michigan, or as Paula and I like doing, one foot in each: 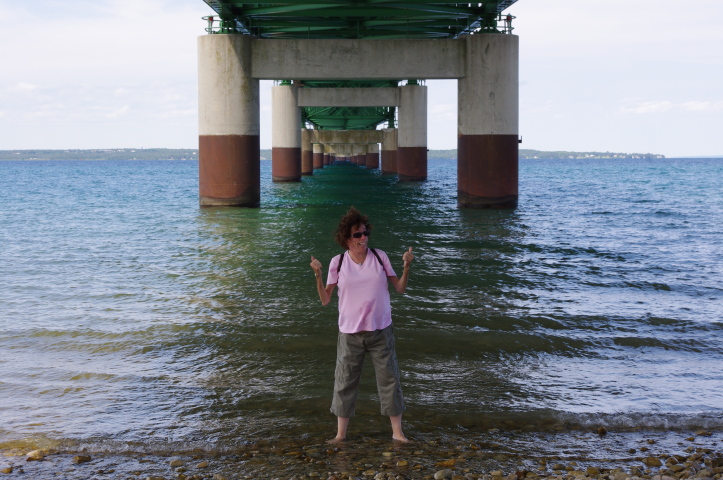 There's also a lighthouse you can tour, including going up to the light tower. It is a fascinating glimpse of a different kind of life, though to really understand it, you must remember the rest of the town didn't exist, nor did the bridge, the freeway, or any way to get access to the rest of the world should you run low on...well...ANYTHING. And you must have experienced a Yooper Winter...

Bridge park: free. Lighthouse: charge (don't recall what)
Hint: the spiral staircase leading up to the light tower is somewhat...well, terrifying. The tower is very solid, there's no swaying or anything...it's just a long spiral staircase, which I (and Paula) found somewhat discomforting and claustrophobic... Going up...scary. Down, scary. Up in the tower, not bad, other than knowing that at some point, you have to head down. But...worth doing.

Yes, I don't consider a trip to the UP having "started" until you cross The bridge.

Something worth knowing/remembering. There's a spelling difference between some of the things called "Mackinaw"

It may be that the City of Mackinaw wanted to minimize postal carrier confusion between the city and island. But however it's spelled, it's always pronounced as "Mack-in-aw".

The Mackinac Bridge is the third longest suspension bridge in the world. This freaks a lot of people out. I've been across the bridge in winter storms and in strong crosswinds on a motorcycle. It can be ... "interesting" but only one car has ever gone over the bridge, and no motorcycles. They do a really good job of closing the bridge when the weather is bad, but you want to go slowly. However you don't want to stop.

If you really can't go over the bridge on your own, they Bridge Authority does offer a service where they get you and your car across the bridge without you driving. I don't think this works for motorcycles.

St. Ignace: Paula and I really love this town. At one point, there were t-shirts and signs reading, "St. Ignace: a drinking town with a fishing problem". But still...it's a nice place. Very tourist dependent, but also appears to have a little life of its own beyond tourists.

Right after you cross the bridge, you come across the US-2 exits. West takes you deep into the UP, East takes you to downtown St. Ignace. Not taking either exit leaves you on I-75, next stop, Sault St. Marie! I'd suggest the East exit.

We like to stay at the Quality Inn Lakefront, in large part because their rooms are quiet, their prices are good, and they seem to know who we are, and often give us hot tub rooms. Though really, we've not been disappointed by any of the places we've stayed there, bang-for-the-buck-wise, at least. Driftwood was small, older stuff, but dirt cheap, and seems to be a favorite for motorcyclists and snowmobilers. There are many places to stay in St. Ignace, but some do close in the winter months. We have since stayed at the OTHER Quality Inn in St. Ignace -- from memory, it used to be called "Quality Inn Bridgeview" or something similar, very near the Mackinac Bridge. Open year round, we were very satisfied with it as well, other than not being walking distance from Java Joe's.

So far, I've mostly covered the eastern UP, I have LOTS to say about the more Western UP, but I haven't got it done yet. But here are a few points: Much of the fun in the UP is a "Copper Country Cruise", which every cruiser has their own definition of, but for me, they usually origin in Houghton, cross the bridge to Hancock, and end up in Copper Harbor. There are a number of fun roads that connect between the two places, though. Other than Brockway Mountain Drive and probably Cliff Drive, all these roads are kept passible year-round. I did a lot of driving up there in a very old rear-wheel drive car, they really do handle the snow well up there.

Things to see in the Keweenaw: